“The drought is there but we cannot complain and say we have been severely affected, infact we have been helping our neighbors by employing them as general hands in our farms”.  This was one general sentiment I heard when I visited farmers in Silalatshani in Filabusi, Insiza District less than a 100kms from Bulawayo in  south of Zimbabwe, a country that is suffering the worst  drought since 1992  and exacerbated by one of the most extreme El Niño impact in past 15 years.

According to the United Nations Office of Coordination of Humanitarian Affairs (UNOCH), El Nino has left an estimated 31.6 million people across Southern Africa food and nutrition insecure. In Zimbabwe approximately 3 million rural Zimbabweans —almost a quarter of the country’s population—are in need of food aid as the drought has adversely affected crop supplies. In February this year, the Government of Zimbabwe declared a state of disaster and issued a 2016-2017 Drought Disaster Domestic and International Appeal for assistance.

It was then surprising to hear farmers from Silatshani, an area that is subject to seasonal droughts and severe dry spells even during the rainy season, say they have not been affected by the drought. So how have these farmers survived and even thrived to an extent of employing their neighbors?

Agnes Mkhatshwa has weathered the drought quite well she believes, and she attributes this to being a member of the Silalabuhwa Irrigation Scheme, which is arguably one of the largest irrigation schemes in the Matabeleland South province of Zimbabwe.

The scheme boasts of 442.8 hectares of arable land and a ready supply of water from the nearby Silalabuhwa Dam, which when it is full holds 23,454 million cubic metres of water. Crop and livestock production and off-farm employment are the main sources of livelihoods for farmers.

Agnes is one of 845 farmers who farm an average of 0.5 hectares of land through a flood-based system of irrigation. In 2014, Agnes was selected to be part of a group of 20 farmers participating in a project, funded by the Government of Australia’s Centre for International Agricultural Research (ACIAR) and implemented by a consortium of partners who include the Food, Agriculture and Natural Resources Policy Analysis Network (FANRPAN), which is cushioning the effects of the drought. The project “Increasing irrigation water productivity in Mozambique, Tanzania and Zimbabwe through on-farm monitoring, adaptive management and Agricultural Innovation Platforms” aims to find means of meeting the African government’s plans for greater food security while using limited water resources more sustainably.

“I long stopped dryland farming because the crops dry up and I was always making a loss. I now do all my farming under irrigation because with irrigation there is no loss. This past year was declared a drought year, but as a farmer in the irrigation scheme, I was not terribly affected by the drought, like my neighbors who practice only dry land farming.” she said as she was cutting and sorting enormous sweet potatoes tubers preparing to take them to the market in Bulawayo.

“Of course we did experience some changes in terms of water distribution and quantities because our dam was not 100% full as with other years. However, the project we are on has helped us to monitor the water in our soils so we do not just water randomly. We use the Chameleon to see if there is enough water in the soil, if not then we water”; she further testified

The chameleon Agnes is referring to is the Chameleon Soil Water Sensor. The sensor measures tension and gives an output resembling a traffic light i.e. green (plenty of water) orange (transition) and red (running out of water) at three depths. The design of the traffic light sensor combines a deep understanding of science in soil water measurement techniques and the social process of adaptive learning, particularly amongst smallholder farmers. 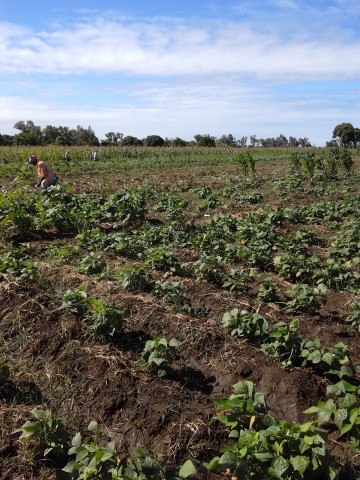 Amidst the worst drought in recent years in Zimbabwe, the project seems to be recording some impressive successes. During the recent project mid-term evaluation, farmers shared how they have made significant increases in yield, they have cut down significantly on the amount and frequency of irrigation, which has resulted in them having more off farm time to focus on caring for school going children.

For Agnes, she has seen the benefits of being an irrigator as she shared that “Irrigation has really changed my life. I now produce high value crops such as garlic, butternut and sugar beans. With the money I get, I am sending my daughter to university, I have never once missed a payment of her school fees and even the boarding house where she stays, I pay the lodging fee on time, and I have never had any problems”.

The ACIAR funded project started in July 2013 and will end in June 2017. It intends to influence national and multi-lateral policies for water, agriculture and food security by providing evidence to enhance sustainability components concerning water and small holder-irrigation.  For Agnes and other farmers in Silalatshani, they hope that the project will be up scaled to include more farmers so that they too can say irrigation changed their lives!