A Leader is a person who influences a group of people towards the achievement of a goal. If this definition is anything to go by, then ATONU’S group of exceptionally performing farmers, appointed as champions to support other farmers on a path towards achieving good nutrition, are leaders. Unlike many projects that start out appointing volunteers to work with in the village based on recommendations, ATONU took a different approach. The project had initially planned to work with existing volunteers in the village and who are mostly identified under government projects. However, the plan did not get through as these volunteers had competing duties from other projects as well as government. At the same time, the understanding of volunteer in the case of ATONU was slightly different from the conventional understanding, considering that the project needed people who can live by the principles advocated in the ATONU project.  It would have been premature to appoint volunteers to motivate other farmers while they themselves did not live the talk. 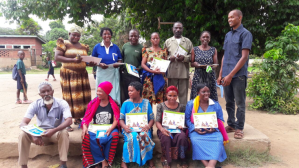 Six months   after the start of project implementation, ATONU field assistants (FAs), with the help of farmers, identified from among the targeted farmers, those who demonstrated meaningful adoption of promoted behaviours (early adopters). These farmers started out just like everyone else, attending sessions and practicing some of the promoted behaviours. They did not have advantaged or preferential treatment, but showed commitment to learn and live the ATONU way. ATONU as a project needed these ambassadors, the Balozi, as they are called in KiSwahili. These farmers, who may be considered as positive deviants, are the right volunteers to carry the message “ If I can do it, so can you” to other farmers. Their primary role is to live by ATONU desired lifestyles on nutrition, hygiene and sanitation, empowerment, thereby getting other farmers motivated to do likewise. Not only is this their role, they are also the voice of ATONU on behalf of others during village meetings. They are going to support ATONU field staff engage other farmers during home visits. One lesson learnt in ATONU project is that farmers are more receptive to the voice of their own, someone they know and interact with daily. 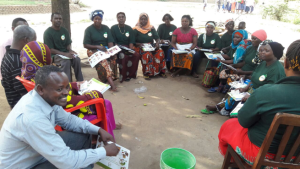 For an ordinary farmer, taking on this role means understanding the objectives of ATONU project, and like every leader who influences a group of people towards certain objectives, the ATONU Balozi are an asset every village needs to have. Development practitioners have argued and proved that social capital is an asset for developing local communities, and in the case of ATONU, engaging Champions/Ambassadors is building a strong social capital for achieving nutrition and health outcomes.   Similarly, for policy makers, considering local level social capital for any development goals will be key.